Donald Trump’s political strategy may have a huge glitch: it could accelerate US debt to highest ever in history.

It has been revealed in a startling report published by Committee for a Responsible Federal Budget, that with Trump’s proposals, the deficit would rise, not fall, as he has promised many times.

It was quite a challenge for the experts creating this report, as Republican Trump is mostly elusive about policy. He hardly mentions his stand on policy, and when he does it is not clear-cut and is inconsistent. However, this report takes into account the few public mentions he has made about policy and has created an estimate analysis with it. In comparison, Democrat Hillary Clinton is much more pronounced about her approach to policy, and provided much more concrete information for the researcher to work with.

What it crucially reveals is this:

This analysis conducted meticulously by the above mentioned committee, has combed together all aspects of Trump’s political agenda, and has taken into account what the policies of Presidential candidates will mean for the overall federal budget, which would eventually decide the total amount of debt held by the public. While some may protest the report’s claim by saying that Trump has promised to abolish estate tax, this report looks at the candidate’s overall political proposals till date, rather than individual policies.

The issue of US debt is highly pressing

This is a stark graph of how US debt would possibly be affected with the two major presidential candidates: 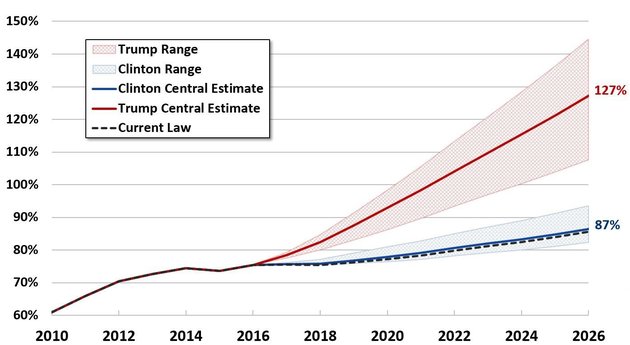 The reasons why Trump could astoundingly increase US debt include:

In comparison, the previous US debt peak was at 110% during the 1940s, but this could be explained by the costs of borrowing due to fighting a world war.

On the other hand, Democrat Hillary Clinton’s agenda could cause debt of $1.4 trillion. However, her promise of focusing programs on early childhood and youth education, offer the hope of great economic benefit for the future. Additionally, Clinton wants to raise taxes for wealthy Americans among other strategies – which could bring in an impressive $1.25 trillion in revenue. Therefore, Clinton’s political agenda seems to have a better impact on the federal budget than Trump’s strategy.

Is Trump or Clinton better for the US federal budget?

The analytical report makes an important statement. It says, “To date, neither former Secretary of State Hillary Clinton nor businessman Donald Trump has put forward a plan to address the national debt.”

However, it also states, “Mr. Trump’s proposals would massively increase the debt.”

The answer is clear – while the US national debt is an issue that should be urgently addressed in political campaigning, Donald Trump’s agenda is likely to severely escalate American debt.