WOULD YOU LIKE EVERY WEEKEND TO BE A LONG WEEKEND?

In the 9-5 mindless 40-hour work week, we all look forward to the three-day weekends. We spend time with family, go to the beach, have cook outs, and enjoy ourselves. But what if that could become the new reality? One governor has tried this out, and the results were promising!

Leading economist John Maynard Keynes once hypothesized that the workload of future generations would decrease so significantly, that people would primarily indulge in leisure, engaging only occasionally in work to maintain already significant levels of wealth.

This concept of moving beyond the traditional 9-5 has long been popular among reformers hoping to improve upon the work life balance across the developed world. We are working, it was thought, increasingly greater hours, at the same time as we continue to grow our wealth base in an unprecedented fashion.

Therefore, surely society should be able to reduce the number of hours worked, whilst at the same time, continuing to enjoy the already high standard of living currently experienced by many dwelling and working in advanced economies.

This theory has been put to the test intermittently for decades, in Scandinavian economies such as Sweden. Indeed, it was there that the idea of the 6 hour work day first entered into prominence, with its trial among public sector workers. Since then, major multi-nationals such as Toyota have boasted a reduction in hours worked among employees based in the nation, at the same time as they have experienced increases in productivity and self-reported worker satisfaction.

With this in mind, when Utah Governor Jon Huntsman was first searching for cost savings in the wake of the global financial crisis, he looked to this very idea, having been reintroduced into public discourse thanks to prominent American management consultant, Riva Poor. Poor had been arguing that society could achieve the same amount as it already did, by maintaining its number of hours worked, but across a reduced number of days each week. 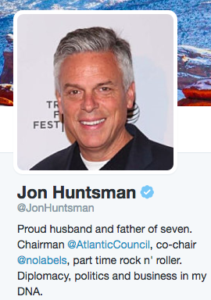 With only one month’s notice, the four day, fourty hour workweek was put to the test with Huntsman requiring public sector workers to stay home on Fridays, making up the remaining hours during the rest of the week. Out of a total 25,000-person workforce, 18,000 with only a small number of essential or related staff, continuing to operate all days of the week.

Despite initial concerns, the majority of Utah citizens appeared to respond positively to the changes reporting greater access to services and public servants, outside traditional business hours. Infact, people all over seem to love the idea of a four day work week:

At the same time, 80% of public servants surveyed reported greater satisfaction, with 65% even arguing that they felt more productive. Not only this, but with absenteeism down by one-third, other localities such as the Forestry Department of the Virginia public service began to contemplate replicating this policy. African nation Gambia introduced a similar such policy, and Ghanaian officials contemplated following the lead of these governments but has yet to enact such a decision.

Most impressively perhaps, the positive results seen in Utah went beyond worker satisfaction and access to services, with congestion during peak hour decreasing across the state as public sector employees began taking transport outside of traditional working hours. The net effect of this across was a decrease in carbon emissions by 14% across Utah.

Such evidence is supported by similar estimates from the Centre for Economic and Policy Research who have modeled the effects of such a policy change, predicting that this could lead to a drop in anticipated climate change by as much as 50% across the world. 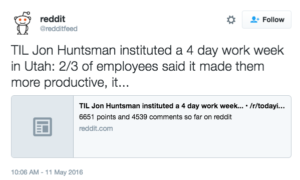 Not only would the proposed policy changes lead to a decrease in carbon emissions and congestion, but with the closure of approximately 900 public buildings across Utah for one day each week, the state was able to bank significant savings that were the envy of a great many public officials.

Despite this policy ultimately being unwound following the appointment of Governor Huntsman as Ambassador to China during the Obama administration, many across the world still consider it to be an important signal for the way that future offices are expected to operate.

In similarly reported and remarkable results, one trial of the 6-hour workday in Sweden, showed that nurses working shorter shifts appear to be taking less personal days and reporting lower levels of stress than those remaining on traditional contracts. This is consistent with other nations such as Holland, where one in three men are either working part time, or compressing their hours into more intensive shifts such as those proposed by Huntsman.

Not all analysts however, have considered these changes to be purely positive. Many are pointing to the fact that where parents are opting for more flexibility in these contracts, they are simply choosing to do so in order to stay at home and undertake housework, thereby displacing one type of work with another. Others have argued that where social media and personal calls are forbidden in the offices of those working 6-hour workdays, they are simply working more intensively, rather than increasing their productivity. Perhaps this too will lead to deleterious outcomes not yet considered.

Nevertheless, with a number of studies pointing to significant health benefits from reduced working hours, this change is surely something that will be considered further. One study published in widely respected medical journal The Lancet, found that there was a 33% greater risk of stroke among those working more than 55 hours per week, when compared against those working between 34 and 40. Moreover, the same difference was observed with respect to increases in coronary heart disease, and deteriorations in mental health. Beyond this, leading sleep researchers have argued that currently, the majority of workers across developed economies are arriving sleep deprived, resulting in poorer performances at their place of work.

With such comprehensive evidence already pointing to the dangers from overworking, what is more remarkable than Huntsman or the Swedish government’s initiative is that more countries haven’t already looked to such solutions. Certainly, working less may not be the solution to all the world’s problems. There are expected to be a number of challenges in reforming the workplaces of so many different industries across so many different nations.

Nevertheless, with such clear benefits evidently present to be realized, it is certainly imaginable that this is a policy area that leaders will be looking towards in the future.