WILL HE SAVE AMERICA FROM HATE-TRUMPZILLA?

According to a CNN report, Michael Bloomberg hired pollsters in December 2015, to check if he stood a chance against Hillary Clinton and Donald Trump if he decided to launch an independent campaign.

Can he stop the GOP frontrunner, The Hate-Trumpzilla? As an independent third candidate?

With a net worth of $41 billion, he is the 7th-richest person in the United States  and the 13th-wealthiest in the world. So he has 9 times more money than noisy Trump, currently worth $ 4.5 billion.

This suggests that the billionaire is mulling over the idea of fighting for the White House. If this is the case, it could open up a plethora of exciting possibilities in the run up to the presidential election. In fact, it has now emerged that Bloomberg has already asked his advisers to advisers to draw up plans for a potential independent campaign in the 2016 presidential race.

Michael Bloomberg is a name to be reckoned with.

Having served as New York City’s 108th Mayor from 2002 to 2013, this business tycoon has had a stellar track record in entrepreneurship and philanthropy. As it is widely known, Michael Bloomberg is the founder and CEO of Bloomberg L.P., one of the world’s premier media and financial data company, which provides support to investment professionals globally. 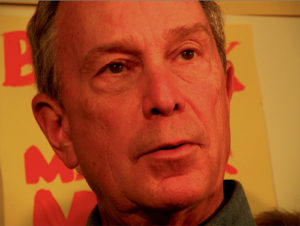 Brought up by Jewish parents, Michael Bloomberg was born in Boston on February 14, 1942. He graduated from Johns Hopkins University in 1964, with a degree in electrical engineering.  He then went on to complete a Master of Business Administration at Harvard Business School in 1966. After a promising start to his career, in 1981 Bloomberg received a severance package of $10 million when the company he worked for – Salomon Brothers was taken over by Phibro Corporation. Bloomberg used this as a golden opportunity to launch his own company named Innovative Market Systems. As the company achieved meteoric success, it was eventually renamed Bloomberg L.P. in 1987.

Bloomberg’s political career began when as a Republican; he became the 108th Mayor of New York City on January 1, 2002. Thereafter, he was re-elected twice, declaring that he no longer wanted to be part of the Republican Party before his term ended in 2009.  What made Bloomberg unique was his conscious effort to demonstrate how he wanted to stay in politics to remain rooted in common people’s lives and needs. During his tenure in office, he pushed for public education reform and fought for the alleviation of poverty.

In an attempt to tone down the New York City Spending Bracket, Bloomberg gave up his salary – and instead charged an annual $1 fee for his work as Mayor. He also made a point by riding the New York City Subway to work. While holding office as Mayor, Bloomberg did everything he could to ensure that his financial affluence did not become a barrier between him and the common people who lived in the city. Interestingly, he even listed his phone number in a public telephone directory, often taking calls from distressed citizens even at odd hours in the day or night. As Edward Skyler, the Mayor’s communications director, describes Bloomberg’s forthcoming nature, “If the mayor is at home and his phone rings, like anyone else, he picks it up. He may ask someone to leave a message on his work voice mail, and the next day he will ask the right person to follow up on it. Sometimes people call to tell him he’s doing a good job; sometimes they call because they want to get a pothole fixed.”

Desire to remain in political power

However, in 2008 it appeared as if Bloomberg had grown fond of the power that politics offered him. While the country was grappling with the effects of a monstrous economic recession, Bloomberg sought to change the law, limiting a New York City Mayor to two terms, in order to be able to run for a third term himself in 2009. He justified this by explaining how the city was in dire need of a leader with financial and commercial acumen after the recession, which he could efficiently provide. In an attempt to silence potential protesters, Bloomberg offered Ronald Lauder – the man who rallied for the original term limit in 1993- the promise of a seat on an important board in exchange. In fact, this offer seemed so lucrative, that Lauder agreed to put away the execution of the very term limit he had heavily financed and steadily fought for.  Speaking out in support of Bloomberg, Lauder told The New York Times, “I saw what was happening with the economy and with prospects for the city, and I saw what happened years ago when the city was going bankrupt. And there is a chance that the city might go bankrupt again. I could support the idea of a third term.” The City Council then voted 29–22 in favor of increasing the term limit to three consecutive four-year terms on October 23, 2008. Many saw this as unfair and controversial.

Firstly, it would mean that Trump could no longer use his entrepreneurial success as his Unique Selling Point in his campaign. If Bloomberg entered the race, he would have the tag of a stupendously successful businessman who remains grounded even after achieving political power, as Bloomberg proved during his term as Mayor of New York City. Secondly, he would probably gain instant mileage with potential voters, with his vocal support for strong gun control legislations in the country.

Bloomberg would also interestingly place Hillary Clinton in a fix. At the moment, Clinton has an edge over other candidates because of her strong financial backing, amongst other elements. If a large pool of funding is what can drive a candidate’s campaign to success, then Bloomberg would be a tough competitor for Clinton.

To elucidate what Bloomberg’s intentions would be if he entered the race, here’s an extract from an article he wrote for his own company’s publication, explaining what kind of President the country urgently needs, “In 2008, Obama ran as a pragmatic problem-solver and consensus-builder. But as President, he devoted little time and effort to developing and sustaining a coalition of centrists, which doomed hope for any real progress on guns, immigration, tax reform, job creation and deficit reduction.” He then continues to elaborate on how the country needs leadership that can take action to reduce the effects of climate change, and speaks about his efforts to close down polluting coal power plants, which allegedly kill over 13,000 Americans annually. In June 2013, nine months after New York City had been affected by Hurricane Sandy, Bloomberg launched the Special Initiative for Rebuilding and Resiliency, worth $20 billion. This project aimed to protect New York City against the effects of climate change in the future.

In short, if Michael Bloomberg did enter the presidential race, Trump and Clinton would have to adapt their campaigns to fight against a serious opponent. Bloomberg could single-handedly threaten Clinton and Trump – with his scrupulously constructed image of a wealthy media baron who could remain dedicated to people’s causes. Add to this, Bloomberg’s access to an enormous source of financial support – and voters could possibly dedicate their loyalty to a new icon who symbolized prosperity, environmentally considerate governance and strong gun control – a delicious cocktail of everything that America needs right now.