The world is still reeling from the shock of the deadly Ankara blasts last week which killed 28 and left several injured. The attack targeted a military convoy as it was passing y important government buildings, killing and injuring several military personnel.  Immediately after this occurred, a similar attack was conducted on another military convoy in the largely Kurdish south-east of Turkey, in the province of Diyarbakir. This attack killed six soldiers.  According to the army, the PKK is responsible for the attack in Diyarbakir.

However, Turkish President Recep Tayyip Erdogan has now revealed who he thinks are behind the violence. He blames the Kurdish YPG militia based in Syria, stating that there is evidence to back this claim. Also, he believes that this group was assisted by the outlawed Kurdistan Workers Party (PKK) in Turkey. Even Turkey’s Prime Minister is of the same opinion, as he said, “A direct link between the attack and the YPG has been established.” He also believed that PKK militants within Turkey offered the YPG logistical support. Interestingly, Washington is yet to comment on the veracity of these claims.

Interestingly, both these groups deny any involvement in the blasts.

In light of these claims, President Erdogan has also announced that 14 arrests were already made, in order to punish the culprits who bombed the military convoy.

In order to understand the tension between Turkey’s government and militant groups, here is an illustration from BBC, which precisely explains the situation: 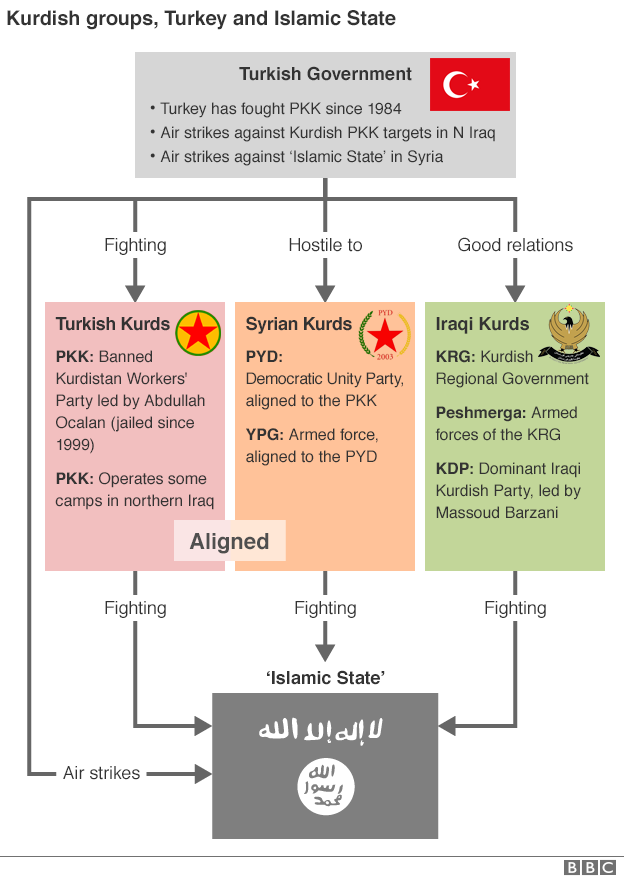 Turkey had only just recovered from the deadly twin attacks on a peace rally in Ankara in October 2015. Killing nearly 100, the blasts were the worst Turkey had ever seen. Hardly few months later, the country has now witnessed yet another deadly attack.

As Turkey also grapples with the migrant influx and managing its power to negotiate with the EU, these blasts have delivered a huge blow to the country’s morale.