WHO WAS SHEIKH NIMR AL-NIMR?

As can be seen in the above video of coverage by Iran’s Press TV, the execution of Sheikh Nimr al-Nimr has sparked outrage in the Shia world. Large groups of protesters have gathered in front of the Saudi embassy in Teheran, with some attempting to storm the building, and setting it ablaze. Similar scenes scenes were last observed during the Iranian revolution in 1979, when the US embassy was stormed by revolutionaries and fifty-two American diplomats and citizens were taken hostage.

As a reaction Riad cut the diplomatic relations and evicted Iranian diplomats.The Saudi Foreign Minister accuses Iran of inciting sectarian strife in the region. Riyadh reported the attacks on the diplomatic mission in Iran to the UN Security Council as the Iranian authorities did not stop protesters storming the consulate.

Bahrain and Sudan joined and severed relations with Iran. The UAE downgraded its team. 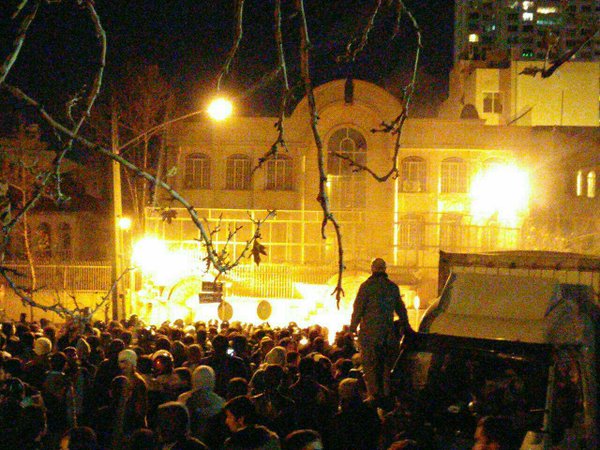 To understand why the outrage could reach this level, one must understand the story of the Sheikh, who’s death has brought Saudi-Iranian relations to their lowest point in years, and might even be the opening act for a serious escalation in the cold war between the two countries.

Up until 2012, Nimr was largely unknown outside of Saudi Arabia. Even there, only those with an interest in affairs of Saudi’s Shia minority would have heard his name. A vocal critic of Saudi Arabia’s ruling family, the Sheikh was a second row Shia leader, who had participated in a number of protests. Between 2003 and 2008 he was sent to  prison eight times for his participation in protests against the house of Saud.  His sermons were,  according to Riad, part of an Iran-led conspiracy to rile up Saudi Shias, who make up about 11% of the total population of Saudi Arabia. But internationally and within Saudi’s Sunni majority, his fight went largely unnoticed. With the exception of the security community, the man was far from household name.

All this changed rapidly, when Saudi Arabia  arrested  the Sheikh’s nephew Ali Mohammed al-Nimr in 2009 during civil commotions in Medina,  and thereafter sentenced him to death by crucifixion. Ali was only 17 years old at the time of the arrest. Following the incident, Nimr held a sermon in which he threatened the secession of the oil rich Eastern Province, which is home to most Saudi Shia. Despite an arrest warrant and plans by the Saudi authorities to kidnapp the Sheik’s children, he was not arrested until 2012. He was sentenced to death in October 2014, a last appeal for mercy was denied in March 2015. This meant that he could be executed at any time. Saudi Arabia does not publicize dates of executions until they have been carried out.

Now his execution together with 47 other prisoners has sparked outrage by Shia groups both inside and outside of Saudi Arabia. His nephew, who’s arrest had propelled the Sheikh into the global spotlight, was not among the executed. Before his death was announced, many had thought that the nephew’s name recognition might end up saving the uncle as well.
In response to the execution, Iran’s Supreme Leader Ali Khamenei has threatened retaliation, as tensions are rising between the two countries vying for dominance in the region:

Saudia Arabia has reacted two the Iranian threats, which must be understood as posed directly to Saudi’s ruling clan, with even more escalation. According to Riad, the Iranian response proves its entanglement in terrorist activities and will be regarded as such.

The International community is trying hard to to calm the waves:

The escalation in the Saudi-Iranian rivalry comes at a time when the United States, which has become largely independent of Arab oil imports through new methods of extracting oil at home, is gradually moving away from its formerly most important ally Saudi Arabia. The direction of this shift was recently reaffirmed by the signing of the Nuclear Accord between Western powers and Iran, which will lead to a gradual lifting of sanctions on the country and the release of previously frozen assets.