WHAT YOU NEED TO KNOW ABOUT THE TALIBAN APP

The Taliban group surprisingly created an app called “Voice of Jihad” aiming to let the people keep up with their news and publications in order promote their propaganda efforts, since they have been struggling to win in Afghanistan for a while.

“The app is part of our advanced technological efforts to make more global audience”, Taliban’s top spokesman Zabiulllah Mujahed said in a telephone interview discussing the release of the app.

The app was developed as an online application for Android, smart phones, signaling the militant group is becoming more adept at using Internet and wireless technologies to increase visibility, a report released on Friday stated. The app was available on Amazon.com, but seems to no longer be available. 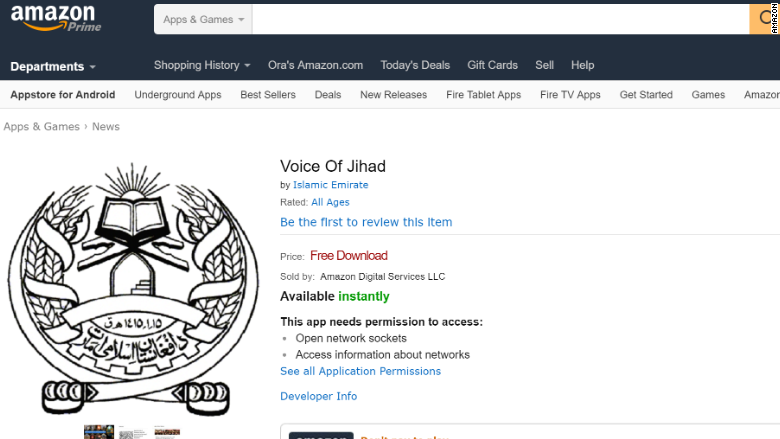 The Voice of Jihad app is reportedly intended to enhance the reach of the Taliban’s public statements, but in case Amazon removes it, Taliban released the app file on Twitter that allows any Android phone to load it directly.

Google says the reason they took the app down was that they “don’t allow apps that advocate against groups of people based on their race or ethnic, religion, disability, gender, age, nationality, veteran status, sexual orientation, or gender identity.

This is the first time that Taliban militants have utilized such technology since their birth in 1994 in Afghanistan.

The app, which runs in five languages including English and Arabic, appeared on Google’s Play Store until Saturday, when it was removed to fix some technical issues, a spokesman said and he added that the app should reappear soon.

An Afghan security analyst Jawid Kohistani believes that the app will help the Taliban to further psychologically weaken Afghanistan with their propaganda reports.

On the other hand, the Taliban group’s website and Twitter accounts have been removed several times as the government of Afghanistan puts effort to disrupt their communication exchanges.

Surprisingly Afghanistan’s spokesman of Interior Ministry Sediq Sediqqi said in a phone contact that he was not aware of the Taliban app.

“All apps in the Amazon Appstore must adhere to our content guidelines and the app in question is no longer available from our store.” Amazon said in an official statement.

Amnesty International reports that the Taliban group is accused of mass murder, house to house searches in some regions and gang rapes.

The Taliban group was formed by their former leader Mullah Mohammad Umar in Southern Kandahar city to adapt Islamic Sharia, but they were defeated by the Afghan Security Forces in 2001 being strongly supported by US Forces and International Allies.

The current leader of Taliban is named Mullah Mohammad Mansor Akhond who has previously worked in higher positions. The Taliban do not seem to be as strong as they were in the past, but still a huge number of people especially from Pashton ethnicity are supporting and cooperating with them.

Photo Credit: By isafmedia, CC BY 2.0, Link to Photo