Those who are fortunate enough to be involved with private prison companies have just hit the jackpot.

Attention has mostly been focused on Donald Trump’s orders to cut federal funding to sanctuary cities and of course to start building the border wall. However, a critical aspect of this was overlooked: the Department of Homeland Security just got a carte blanche to expand immigrant detention.

The executive order that Trump authorised allows the department to “allocate all legally available resources” to “establish contracts to construct, operate, or control facilities to detain aliens at or near the land border with Mexico.”

This means that paying private prison companies like the GEO Group and CoreCivic to open up new facilities is the only way to keep up with the Trump administration’s iron-fisted “enforcement priorities” on immigration.

“It’s worse than we even imagined,” said Bob Libal, executive director of Grassroots Leadership, a nonprofit that opposes private prisons. “It’s the policy manifestation of all the ugly bigotry that Trump spewed on the campaign trail.”

The enforcement priorities laid out by the Trump administration, outlined in the executive order, will likely entangle hundreds of thousands of people – including those who present themselves at the border as asylum seekers, undocumented immigrants who have only just been accused of crimes but not necessarily found guilty, and it will include those convicted of petty crimes like driving without a licence.

All of the above could be locked up indefinitely, and current detention facilities are already at capacity.

“This is an enormous boondoggle for the private prison industry,” said Carl Takei, a staff attorney at the ACLU’s National Prison Project. “The people that will benefit from these executive orders are not American taxpayers but corporations that are making a killing off of jailing asylum seekers and other immigrants.”

The one limit on this potentially infinite cash sinkhole is that Trump’s order limits Homeland Security to the use of “available resources”.

So while this is not a blank cheque at the moment because it doesn’t increase on the $40.6 billion already allocated for the 2017 fiscal year, it does mean that Congress will decide how much more cash it wants to throw at expanding immigrant detention by the next budget, due at the end of April.

Projected costs put Trump’s immigration detention plan at $35.7 billion, with an additional $13.4 billion for “aggressive interior enforcement” and $11.3 billion for legal processing – totalling over $60 billion. This, according to the Center for American Progress.

Trump’s immigration agenda presents a material external growth opportunity not seen in years for private prison companies. Forecasts of up to a 25 percent spike in the value of GEO Group’s stock have been predicted.

Above are the stock prices for private prison companies CoreCivic (red) and The GEO Group (yellow) compared to the Dow Jones Industrial Average.

This is a complete turnaround from last August when upon finding that private prisons did not save taxpayers money and were less safe than government-run facilities, the Department of Justice announced it would end the use of private prisons for the housing of federal inmates.

Back then, Shares of CoreCivic and the GEO Group instantly plummeted 35 percent and 40 percent, respectively.

The GEO Group contributed more than $225,000 to a pro-Trump super PAC, and their stock spiked by 21% on the day after the election. They also hired two ex-Sessions aides as lobbyists. CoreCivics increased by 43%. The majority of their revenue comes from housing immigrants.

By law, Immigrations and Customs Enforcement is required by law to keep at least 34,000 immigrants in detention on any given day, two thirds of which happen to be locked up in private prisons. 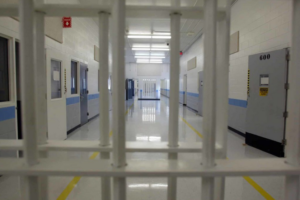 The recent influx of Central American asylum seekers has already overwhelmed the immigrant detention system with authorities struggling to find bed space for around 41,000 people. Private prisons were quick to step up and help meet the demand, this will surely only increase after the fallout of Trump’s executive orders in the coming months and years are enforced.

“It’s the realization of our worst fears about what this administration would do on immigration,” Takei said. “If and when these terrible unconstitutional ideas are implemented, we’re prepared to sue.”