The leaders of two of the most powerful nations on earth shared a steak meal in Florida, but the stakes in the trade talks are much higher for China than they are for the US, as they would struggle to find a better export market.

Trump has described his relationship with Xi Jinping as “very, very great”, but that shouldn’t fool anyone into thinking that the US president does not harbour deep suspicions of his Chinese counterpart.

China and Xi have much more to lose economically than Trump and the US do from a potential trade war. Beijing could deploy their own economic nuclear option if Trump decides to go ahead with taxing Chinese imports as per his campaign pledges by sending America’s economy off a cliff. They own more than $1 trillion of the US’ debt, and if China sanctioned a dumping of US Treasury bonds… well, the world’s largest economy would see a crisis like never before.

However, this would be MAD (mutually assured destruction) – because if this nuke was set off then China could indeed cause damage to the US, but only by damaging itself in the process. The old adage is proving true: if you owe the bank a thousand dollars, you have a problem; if you owe the bank a trillion dollars, the bank has a problem. Trump knows he holds the cards here. 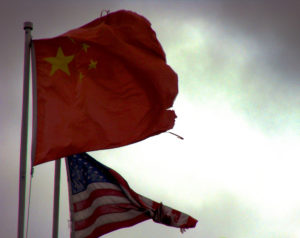 China is also keen to avoid the ensuing social and political unrest that a trade war with the US would bring. Their willingness to flood the economy with credit to finance unprofitable investments shows their determination to avoid a steep rise in unemployment.

Nearly 4% of China’s GDP comes directly from exports to the US, while the equivalent figure for the US is less than 1%. There are several countries that could provide the US with alternative locations to manufacture goods, but China would have a tough time finding an alternative to the US for their exports.

Brian Davidson of the US’s Fathom consultancy said, “The US position in these trade negotiations is strengthened by international trade law, and by China’s systematic violation of obligations under World Trade Organisation rules. The US has scope to open, and win, lawsuits against China at the WTO, a point not lost on both leaders.”

I explained to the President of China that a trade deal with the U.S. will be far better for them if they solve the North Korean problem!

Trump wants to get tough on countries like China, which he says are causing the $500 billion US trade deficit pic.twitter.com/sx9sRzp8vh

President Xi is hoping that Trump can be talked down from the aggressively anti-China sentiment that he peddled on the campaign trail, and has given Trump vague promises of Chinese investment in the US to soothe the pains – but will this be enough for Trump?

Trump has made America’s $350 billion trade deficit with China a cornerstone of his presidency, and while the fact that the attacks on Syria took place while Xi was with Trump in Florida was merely a coincidence, it does speak to Trump’s unpredictability and impulsive nature.

The 45% tariff on Chinese exports that Trump has talked about is still in play, and the Beijing does not know if Trump will follow through or not. Most likely to avoid it, it will require Xi to remove the barriers that make it difficult for US tech companies to export to China.

There will be less talk of China “raping” the US in coming months, but Trump is learning from one of his predecessors, Teddy Roosevelt, to “speak softly and carry a big stick”.

…goodwill and friendship was formed, but only time will tell on trade.