A Russian navigator who went missing after his jet was shot down by Turkey, November 24, 2015, was rescued in a 12-hour operation involving special forces, Russia says. Captain Konstantin Murakhtin is “alive and well” at a Russian air base Latakia in Syria.

The pilot and his navigator came down alive with their parachutes from the burning plane in Syria.

The pilot Lt Col Oleg Peshkov boarded a Russian rescue helicopter, which was downed later by rebel fire, Russia’s military told. He and a marine involved in the failed rescue attempt were killed.

The Turkish airforce has shot down a Russian  SU-24 jet , which was for only 17 seconds in Turkish airspace near the border to Syria. Most probably the pilot navigated incorrect.

It is unclear whether the air-to-air missile shot by a Turkish F-16 hit the Russian jet over Turkish or Syria territory. The jet exploded on Syria ground.

“Two SU-24 planes, the nationality of which are unknown, approached Turkish airspace in the Yayladagi-Hatay region. Both planes, at an altitude of 19,000 feet, disregarded warnings and violated Turkish airspace to a depth of 1.36 miles and 1.15 miles in length for 17 seconds, just after 9:24 a.m. Following the violation, plane one left Turkish national airspace. Plane two was fired at while in Turkish national airspace by Turkish F-16s performing air combat patrolling in that area in accordance with the rules of engagement.”

The second plane crashed on the Syrian side of the border.

Turkey released an audio-file of the warning to the Russian plane.

According to the Moscow Times,  Russian President Vladimir Putin held an emergency cabinet meeting in the Kremlin.

“…Today they practically declared war on us by shooting down our fighter. Our patience wears thin with Erdo?an and his criminal clique who is accomplice in all atrocities committed by ISIS terrorist.To avoid a bitter war which nobody craves, for several times, I told Americans to muzzle their rabid dog in Turkey,” Russian News Agency TASS cited the Russian President as saying.

“I was informed that Turks have shot down a Russian aircraft on the border with Syria and reportedly the navigator has been killed.”

“We are indeed on the verge of an all-out war with the godfather of all terrorists in one of the extremely volatile areas in the world,” added Mr. Putin.

“The Turkish AK Party-led regime under Erdo?an seeks to ignite the fires of war.”

Russia’s defence ministry, in a series of tweets, confirmed a Russian Su-24 had been shot down, but insisted the plane had never left Syrian airspace and claimed that fire from the ground was responsible. “At all times, the Su-24 was exclusively over the territory of Syria.”

“The Su-24 was at 6,000 metres and preliminary information suggests it was brought down by fire from the ground. The circumstances are being investigated.”

Speaking to journalists this morning, Russian President Putin said that the jet was travelling at an altitude of 6000 meters at a distance of about one kilometer from the Turkish border. He stressed that the plane presented no threat to Turkish national security:

“This incident stands out against the usual fight against terrorism. Our troops are fighting heroically against terrorists, risking their lives. But the loss we suffered today came from a stab in the back delivered by accomplices of the terrorists.”

Russian Foreign Minister Sergei Lavrov has cancelled his visit to Turkey, where he was due on Wednesday. Russians have been advised not to visit Turkey  which is a popular tourist destination, and one of Russia’s largest tour operators, Natali Tours, has suspended all holiday tours to Turkey .More economic sanctions are discussed in Moscow.

The Turkish state television has released the image of a military radar representation. It shows the Russian jet (red) passing over the Turkish border (blue), with two circles several miles within Turkish air space (black). The grey area is Syria. It also shows the Russian jet heading back towards Syrian airspace, where the pilots landed.

It shows that Mr Putin was misinformed by his military. The Russians violates Turkish air space. But he has a point as well: the air-to-air missile was fired by the Turkish F-16 in Turkey air space, but followed the SU-24 into Syrian air space, where it hit the plane from the back. As well there are international procedures how to warn foreign aircraft. Just to shoot a missile is not the standard. So is was mismanagement on both sides.

According to the White House there was a breach of Turkish airspace, but it lasted “only seconds”.

The SU-24 could at best be described as a crossing over Turkish territory. It flew over a small piece that reaches into Syria, an istmus of land, for seconds. Not enough time to warn several times. So ist was over Turkey, but you may say, flying out as well. 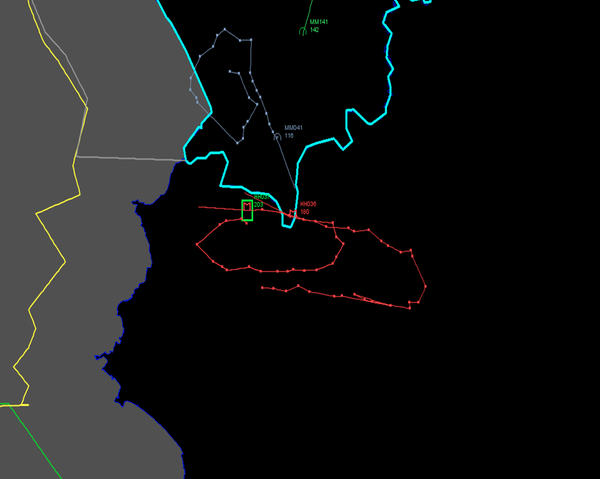 “As we have repeatedly made clear, we stand in solidarity with Turkey and support the territorial integrity of our NATO ally, Turkey,” NATO secretary general Stoltenberg said.

Kremlin spokesman Dmitry Peskov has said that the Russian mission in Syria will continue.

Turkey and Russia have opposite interests in Syria.

Moscow is attacking Turkmen militia in northern Syria, the best allies of Turkey in the fight against the regime of Syrian President Bashar al-Assad in Damascus. Russia is Assad’s best friend.

In recent months Russia has build a reputation for testing borders and provoking other nations, both in the context of the Syrian conflict, and as well in Eastern Europe, where Russian forces are still involved in the military contest over Ukraine.

The United States and the EU want to integrate Russia into a front against ISIS. This process which started with a successful conference in Vienna just days ago, is in danger now.

President Erdogan is a very difficult partner for the U.S. and Europe.

He focussed more on bombing the Kurdish PKK , who fight ISIS, than the Islamic State. There are indications that the Turkish secret service and politics are involved in making al lot of money with ISIS oil, weapons and refugees. The border from Turkey to Syria is still wider open. Inside this NATO ally any protest is broken by police, journalist jailed and opposition strangulated. The important reconciliation process with the Kurds stopped. Erdogan wants to became an absolute autocratic leaders, a kind of modern sultan, with the AKP as the dominating party within a non-pluralistic Islamic state.

Sigmar Gabriel, chairman of the Social Democratic Party and Vice Chancellor of Germany criticized Turkey openly in Berlin as a “unpredictable player, playing a difficult role”.