RUSSIA GETS TOO CLOSE TO US

We all know that the relationship between the Untied States and Russia is not great as of late. But earlier this week, it seems things escalated with Russian aircraft flying within 30 feet of a US Navy ship in international waters. 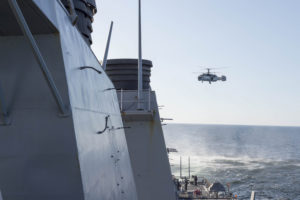 According to Admiral Mark Ferguson, the Commander of U.S. Naval Forces Europe-Africa, “April 11-12, USS Donald Cook was operating in a professional manner in international waters conducting operations and exercises with our allies in the Baltic Sea.” He also said, “In my judgement these maneuvers in close proximity to Donald Cook are unprofessional and unsafe.”