After more than one year of intense political turmoil and a session that lasted more than 18 hours, the Senate confirmed by 55 votes in favor against 22 what the lower House decided last month: Dilma Rousseff should no longer be the president of Brazil. As Ms. Rousseff walks away from the Presidential Palace, the political and economic crises of the country are not going to follow her. While the final result still lacks a formal trial, which could take up to 180 days – with the possibility of Rousseff´s coming back in an unlikely turn of events – the vice-president Michel Temer takes office as the interim and likely permanent President until the general elections of 2018.

Over the past weeks, Ms. Rousseff has been accusing Mr. Temer, together with Mr. Eduardo Cunha (the man responsible for opening the impeachment process) of being the chief of the conspirators that took her out of office. Mr Cunha, also from the PMDB political party, was recently discharged from his post as the President of the lower House after a decision by the Supreme Court – the first one of this kind in the history of the country – following an accusation made by the Attorney General. The Supreme Court found incompatible the permanence of Mr. Cunha in his post with the many accusations referring him as the beneficiary of money laundering, embezzlement and corruption related schemes during his political career. His substitute at the lower House (Mr. Waldir Maranhao) even tried to annul the impeachment decision voted last month, but that request lasted less than 12 hours. After being ignored by the president of the Senate, Mr. Maranhao cancelled the annulment. 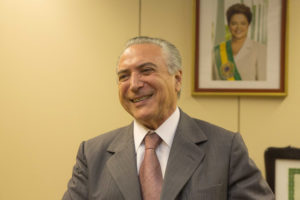 Looking more like a mix between a Mexican soap opera and House of Cards, the political turmoil will hardly calm down after the inauguration of the interim president. On his hands, Mr. Temer has to face three major challenges that will define whether he will be able to put the country back in track or if he will have the same destiny of his predecessor:

The Brazilian political system is very complex and needs structural reforms that will hardly be addressed by a transitional government. Called “coalition presidential-ism”, the political system is based upon the idea of having a strong president who is able to deal with a Congress currently comprised of 25 political parties from different ideological positions and sew agreements in order to get the measures of the Executive approved. Mr. Temer will have to demonstrate a strong ability to deal with a fragmented system from day one in office if he wishes to get his policies approved. Although many blame Ms. Rousseff for lacking the dialogue and ability needed to build and sustain a solid base in Congress, the system’s imperfections remain a major cause of the current political crisis.

Since the general elections of 2014, millions of people took the streets either to protest against Ms. Rousseff´s government or in favor of it. Among their demands were the fight against corruption, a solution to the economic problems and the need for a political reform among the few similarities shared by both sides. Taking office in a country divided by different ideologies and needs, Mr. Temer will have to address the economic challenges while listening to – or pretending to listen to – the claims of the streets. One of the main topics of the economic reforms is to show whether the government is doing its part in cutting the excess of public spending. Mr. Temer expressed a willingness to reduce the number of ministries from 32 to 22 by extinguishing some and merging others.

However, cutting down the state machine will likely hamper the construction of a solid coalition in Congress – his first problem. Reducing ministries is an important message from the new government as part of the reform strategy, since many of the economic measures – cuts in subsidies, reduction of government transfers and increase in taxes – will likely affect beneficiaries of social programs and workers the most. With supporters of the Workers Party already against the new government – which they consider illegitimate – less support from the streets would definitely threat Mr. Temer´s position.

Ms. Rousseff´s removal from office should not be viewed as the season finale of the Brazilian version of House of Cards. Mr. Temer’s inauguration marks the beginning of a second season and we should expect many plot twists over the next few months. Such as Mr. Underwood, Mr. Temer promised not to run in 2018 to guarantee the support of the major opposition party – PSDB – in a bid to secure the approval of his measures in Congress. While the names for the 2018 race remain a mystery, the biggest corruption scandal in Brazilian history will likely uncover new facts which can impact the political life of the country. After Ms. Rousseff´s PT, the PMDB from Mr. Temer is the party with the most people accused of being beneficiaries of the corruption scandal. If the economy does not get back on track in time, popular dissatisfaction might trigger further instabilities.

Is there a light at the end of the tunnel?

Mr. Temer is a clever politician and has been at the backstage of power for decades. Being the former President of the Lower House on three separate occasions and following Ms. Rousseff as her vice-president since 2011, he knows the political ins and outs of the country´s capital, Brasília. What is said to be Ms. Rousseff’s greatest sin – lack of dialogue and capacity to reach agreements with Congress – is in the blood of the new president. Last year, Mr. Temer did a pretty good job gathering the necessary support to get unpopular economic measures of Ms. Rousseff´s fiscal package approved in Congress. After delivering them, Mr. Temer left the post of Political Coordinator of the government and slowly walked away from Ms. Rousseff’s administration as the crisis deepened.

However, being skilled in the shadows does not necessarily promise him a great performance under the spotlight. Mr. Temer will have to prove himself capable of dealing with an unprecedented crisis if he is willing to give his successor the conditions to make Brazil great again after 2018. Whether Brazilians like him or not – and many do not -, the country’s future is now in his hands.