Polar bear hunting and walrus attacks were some of the early perils of explorers north of the Arctic Circle had to contend with. Many of these expeditions were joint American-Norwegian efforts and Arctic cooperation between the Nordic Kingdom, and the United States is at the center of an unusual gift-giving celebration between Norway and the U.S. this year.

Since 1997, the Embassy of Norway has been the tall tree soars into the air inside Union station in Washington D.C. The tree symbolizes Norway’s gratitude for help received during World War II.

This year Norway has taken advantage of a unique double anniversary to use the tree as an instrument of soft power and included the historical display developed by Norway’s Frumm museum. The display comes at an important moment in Norwegian-American relations.

Huge Christmas tree, gift from Norway, at Union Station in DC, with exhibit on Norway-US partnership in polar exploration. pic.twitter.com/dxoXNwAPTD

Next May, the United States will host a meeting of the Arctic Council in “It’s a double anniversary 20 years of the gifting of the tree and 20 years at Union Station. A lot of Americans don’t realize that the United States is one of only eight polar nations nor the fact that almost every major Arctic expedition has been collaborative between U.S. and Norway, ” said Urd Milbury who is the the Culture and Communications Advisor for the Royal Norwegian Embassy in Washington D.C. Additionally, the Norwegian city of Tromso is hosting the Arctic Frontiers conference. The annual event is one of the world’s most important Arctic policy forums.

Norway expects that Norwegian-American cooperation will only grow under the new administration of President Elect Donald Trump. ”Expects that cooperation will continue “ I expect that cooperation will remain very close and at the upcoming Arctic Council, Scientific Cooperation and sharing of data,” said Leif Trana, who heads the Arctic policy team at the Norwegian. Sharing of scientific data can sometimes be a challenge and making scientific cooperation easier is the best industry in Norway.” He said. Trana also noted the strong ties that had developed under the Obama Administration with Secretary of State John Kerry visiting Northern Norway last year and visits by Defense Secretary Ashyln Carter.

In 2015 the nations which form Arctic Council (Denmark, Finland, Iceland, Norway, Canada, Russia, Sweden, and the United States) held the first ever Arctic Coast Guard Forum. Next year the forum will hold a second conference in Boston. The increased number of cruises and shipping means that Arctic Councils are increasingly developing contingencies for oil spill prevention and rescue operations. 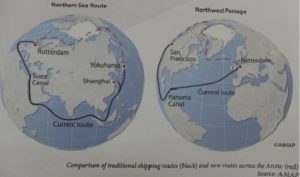 The energy relationship between the states remains strong. Norway’s Statoil existed Alaska last year and Canada’s oil sands oil fields this year. Yet, the Norwegian oil giant remains interested in potential oil plays in North America. The reverse is also true. American oil companies Chevron and ConocoPhilips both won exploration assets in the  23rd licensing round for oil exploration in Norway earlier this year. Norway was able to offer up new areas for exploration after a 2010 between Russia and the Kingdom of Norway ended a maritime border dispute.

Oil aside scientific discussions will likely take precedence at the Arctic Council meeting next year.

“We are hoping that the council will see further cooperation agreements between the ministers on science cooperation in Arctic and on everything from fishing data to different ocean currents, climate currents, indigenous heritage, erosion, and also data regarding polar bear populations” Trana explained.