Munich Killer was a Teenager with Mental Problems

At around 6 PM Friday evening, July 22nd, 2016, a mass shooting (involving multiple victims of gun violence) started in started in Munich in the popular McDonald’s Restaurant at the Hanauer Strasse in the north and continued in the Olympia Einkaufszentrum (OEZ- shopping Mall) on the other side.
[removed][removed]


[removed]// [removed]
The first seven hours it was unclear whether it was a terror attack or not.


[removed]// [removed]
Horror has struck yet another city, after an ISIS attack in Würzburg in Bavaria days ago and the large attack in Nice.

Munich, one of the largest cities in Germany, known for Oktoberfest and Bayern München soccer team,was put under partial lockdown as a shooting rampage was underway.

Police deployed helicopters and were actively searching for multiple gunmen, however after finding one gunman dead, they determined that it was an act of a single, lone wolf attacker.

It seems that the police force in Munich was not prepared to handle a crisis like this, as the police information response was extremely slow. They had said that they were looking for three suspects, but this was based solely on a couple eyewitness reports.

As of now there are no  links to ISIS and a Munich Police Spokesperson has said there is no indication to “Islamist terror”, and according to ISIS propaganda channels:

ISIS propaganda channel: "Munich so far not claimed by Islamic State. But everything hurting infidels make us happy" pic.twitter.com/9MW0BluaoN

Additionally there was a video that shows one of the attackers on top of the car park, saying “I am German” as onlookers shout abuses at him.

The scene was gruesome, as blood can be seen (warning: graphic) 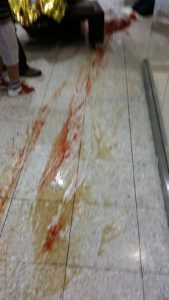 People began running out from the mall as seen below:

Later, police operations entered the mall as can be seen here:

As has the State Department

US citizens in #Munich advised to shelter in place. Media reports of shots fired at Olympia shopping mall: pic.twitter.com/DWRw6CGa7q

This is just the latest attack this week, following the attacks in Nice and the train attack in Germany.

Recently, intelligence leaders got together in Berlin and had discussed IS terror in Europe, saying that it was no longer an if, but when.