Like an American Caligula Trump Axes NATO, the EU and the Old Transatlantic World Order

Donald Trump invited two journalists into his office in Trump Tower in New York and spoke frankly with them about his new world vision, NATO, the European Union (EU), and Russia.

Michael Gove interviewed him for The Times in London. The New York Times noted: “The interview Mr. Trump granted was to Michael Gove, who strongly supported Brexit and ran for the Conservative leadership against Mrs. May, who immediately fired him from the cabinet. Mr. Trump’s first meeting with a British politician was with another May adversary, Nigel Farage, the former leader of the anti-Europe U.K. Independence Party, or UKIP.” Mr Gove had stabbed Mr Johnson in the back by withdrawing support for his leadership bid at the last minute and running himself. But he was defeated by Mrs. May. 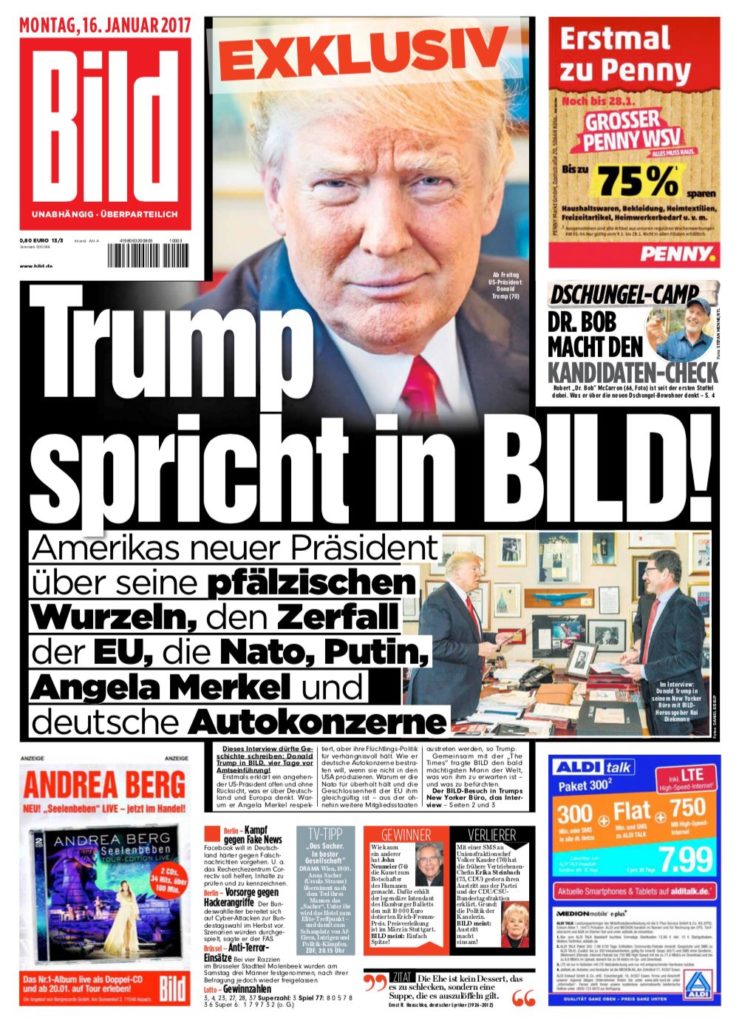 The second journalist was Kai Diekmann, the publisher of BILD newspaper (picture) from Axel Springer Publishing house in Berlin. It is Germany’s and Europe’s largest tabloid with a circulation of 12 millions readers. Diekmann will leave his position end of this month. He is a close friend of former Chancellor Helmut Kohl, and one of the best journalists in the world.

Both are very well connected to global media czar Rupert Murdoch, also in control of pro-Trump Fox News TV and The Wall Street Journal, who has joined the Trump fans late.

Kai Diekmann wrote in BILD about Trump in a comment:

“Only one thing is for sure: Nothing is safe from him. No political rules, no diplomatic customs. He only thinks in deals. He is rude, offensive- disturbing honest. This can lead to conflicts, but break up encrusted conflicts too. Trump is incalculable.” 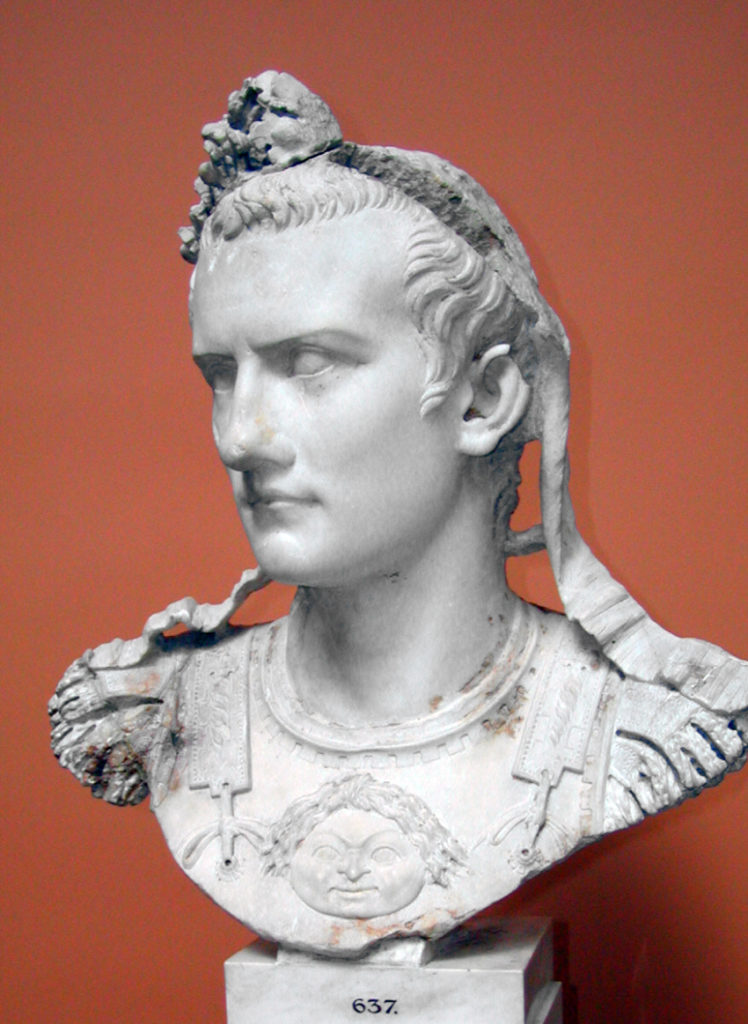 Is Trump a new kind of American Caligula in the 21st century, the famous emperor who burned down Rome (picture- living from AD 12 to 41, emperor in AD 37 to 41.), now destroying the transatlantic alliance of 70 years and stability in Europe flirting with populists and promoting appeasement with Mr Putin?

The only thing we know for sure is, Donald Trump will not burn down New York, as he owns real estate there. Everything else is incalculable, vague, unclear and may change in one speech or next day.

He is like a white shark looking for the next “deal”, swimming around and away any second. You never know if he bites or kisses you – maybe both, maybe first one and later the other.

Nobody can calculate what he stands for, besides himself and his XXL ego.

His presidency is based on sand – his incalculable, always changing ideas.

GLOBALO is analyzing Trump’s statements, published in BILD and The Times, and connects them with a helicopter perspective:

Here are the 7 most important things he said:

Trump:  “I said a long time ago that NATO had problems. Number one it was obsolete, because it was designed many, many years ago. Number two the countries aren’t paying what they’re supposed to pay. A lot of these countries aren’t paying what they’re supposed to be paying, which I think is very unfair to the United States. With that being said, Nato is very important to me.”

2. Brexit is a “great thing”, more countries will follow out of the EU which will break up

Trump: “People, countries, want their own identity and the UK wanted its own identity.” If EU countries hadn’t been “forced to take in all of the refugees” then “you wouldn’t have a Brexit … I do think keeping it together is not gonna be as easy as a lot of people think. “And I think this, if refugees keep pouring into different parts of Europe… I think it’s gonna be very hard to keep it together because people are angry about it.”

“I think Brexit is going to end up being a great thing,”

Trump: German Chancellor Angela Merkel made “one catastrophic mistake” by welcoming an unlimited number of Syrian refugees, which he referred to as “all these illegals”.

He also suggested the December Christmas market attack by a Tunisian man was one effect of Ms Merkel’s policies.

“For one thing, I think nuclear weapons should be way down and reduced very substantially, that’s part of it,” he said.

“But Russia’s hurting very badly right now because of sanctions, but I think something can happen that a lot of people are gonna benefit.”

5. What about Syria and ISIS?

Trump: He criticized President Barack Obama: “Nothing happened” when the US “had a chance to do something when we had the line in the sand.”

6. How to treat hostile Iran?

Trump: “I just don’t want to play the cards.” He was “not happy” with Barack Obama’s deal with Iran on nuclear weapons and described it as “one of the worst deals ever made”.”I think it’s one of the dumbest deals I’ve ever seen… Where you give … $150 billion back to a country, where you give 1.7 billion in cash. “”Did you ever see $100 million in hundred-dollar bills? It’s a lot. 1.7 billion in cash. Plane loads. Many planes. Boom. 1.7 billion. I don’t understand. I think that money is in Swiss bank accounts.”

Trump: He boasted about his 46 million followers on social media and said he tweets so much because he is “covered so dishonestly by the press”.

“I’d rather just let that build up and just keep it @realDonaldTrump, it’s working — and the tweeting, I thought I’d do less of it, but I’m covered so dishonestly by the press — so dishonestly — that I can put out Twitter — and it’s not 140, it’s now 280 — I can go bing bing bing… and they put it on and as soon as I tweet it out — this morning on television, Fox — ‘Donald Trump, we have breaking news’.”