Speaking at a conference in Teheran, Iran’s president Hassan Rouhani publicly lamented the bad image of Islam, which was being spread around the world by terror groups such as the Islamic state.

Attending the conference, themed The Muslim World’s Current Crises, were more than 400 Muslim scholars from over 70 countries (pictures).

Stressing that economic poverty was a key driver of radicalization, Rouhani criticized state’s investment in armament instead of providing help to those that most need it.

In order to prevent violent conflict, it is necessary,  “to eradicate cultural and financial poverty in our societies.”

With a reference to the adversary Sunni Saudi Arabia and the Saudi arial campaign in Yemen against Shiite rebels, he said that even those Muslim countries which had bombarded their neighboring countries should be included in negotiations. 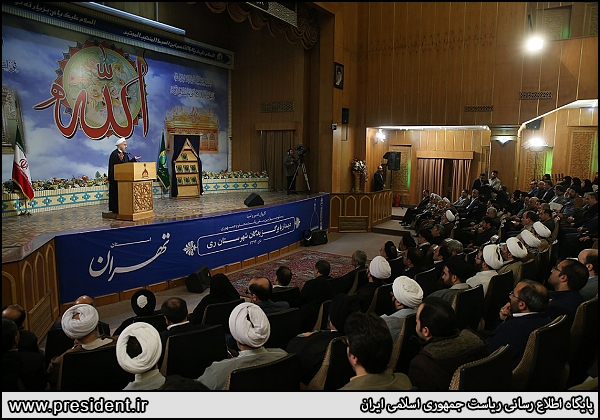 Iraqi Foreign Minister Ibrahim al-Jaafari, who also spoke at the conference, seemed to agree with Mr Rouhani. He said: “The political, social, economic, theoretical and security turmoil in Islamic countries stem from lack of will among Muslims.”

Iran is involved in almost all of the region’s conflicts. It has close ties with neighboring Iraq and its Shiite prime minister Haider al-Abadi. In Syria it supports the government of Syrian President Bashar Assad, while in Yemen, it is also an ally of the Houthi movement which has fought a Saudi led coalition for nine months last year.

The religious and political conflicts between Shiites and Sunnis fuel the wars and terror in the Islamic world. Most victims are Muslims. Iran and Iraq are fighting the Sunni brutal ISIS (IS,Daesh)in Syria and Iraq. On the other side Iran’s friend president Assad started their rise by terrorizing his own people with now more than 300,000 killed.

It is unclear whether the statement of the president is a start of the needed reconciliation between Sunni and Shiite states, mainly Saudi Arabia, Egypt and the Gulf countries on one side, and Iran on the other side.