How Sokcho Became the City of Pokemon

Pokemon Go is the latest craze to hit the globe, and one nation, the fourth largest gaming nation in the world, is still left in the dark…mostly.

South Korea is a tiny country, yet for it’s size it has a huge amount of people. And as the most connected nation in the world, it also has an insatiable appetite for gaming.

However, for a number of reasons, the new game Pokemon GO is still unavailable in most of South Korea. However, due to what many are calling an accident, the game is available to play in one city on the east coast, Sokcho. Sokcho is a beautiful city that was once a fishing village, and is close to the border of North Korea, and close to Soraksan National Park. Because of its location and the design of the grid system of the game, Sokcho is not in a grid that the game defines as South Korea, therefore making the game available to play. 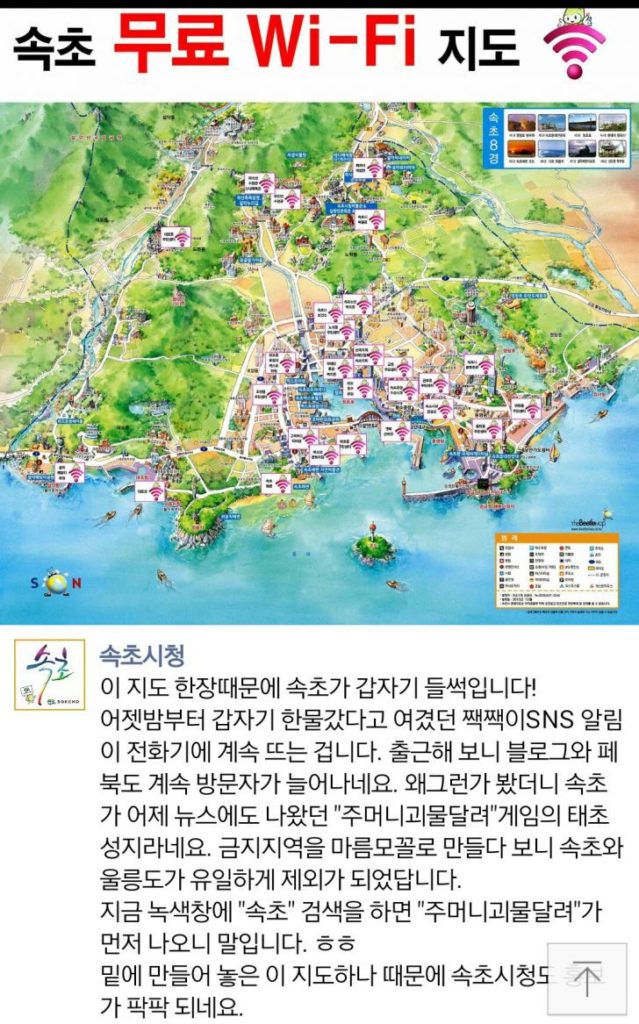 Sokcho City Hall (The official fb account of Sokcho) Sokcho is suddenly very excited because of this map! The twitter alarm was popping up on the phone since yesterday night, and the visitors to facebook & blog are rising. Turns out that Sokcho is the beginning city of the “PokemonGO” game, which was also on the news last night. Because of the way the area are blocked, Sokcho and Ulleung island became the only exceptions. When you google “Sokcho,” “PokemonGO” comes out as a related search. Thanks to this map, now the Sokcho City Hall is becoming more publicized. via Imgur 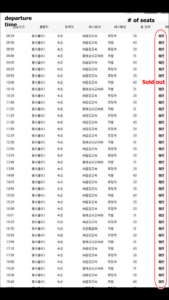 Bus Tickets are all sold out via Imgur

This news hit social media on Wednesday, and extremely quickly, every bus ticket and train ticket to Sokcho was sold out. Thousands flocked to Sokcho to play this addictive new game, and the city has embraced Pokemon. The government has set up hundreds of free WiFi spots as well as phone charging stations, apparently in a move to take full advantage of this accident. Korean news outlets are even reporting that the Mayor of Sokcho has played Pokemon and enjoys the game.

This is a perfect example of a town capitalizing on a trend. It also helps that as the most connected nation in the world, South Korea has exceptional infrastructure to support a game like this. With a strong middle class and really affordable public transportation, the influx of people to the city has been overwhelming. Restaurants are giving away free extras to “Pokemon Trainers”, and hotels have seen a surge in reservations. For those unable to stay for a long time, day trips have emerged, where a bus will not only drive people from Seoul to Sokcho, but the bus will drive them to each major Pokemon hotspot.

But why is the game not available?

The game has not been released officially yet, and it is unclear when or if it will. There are no technological barriers to the game getting implemented in South Korea, the barriers are political. To function, the game uses Google’s StreetView map data, which is not available within South Korea. The resolution of satellite imagery is lowered in South Korea, and this is due to a national security law, to hinder any potential threat from North Korea. So if North Koreans were in South Korea, their map data would be insufficient to plan and carry out an attack. Because of this law, the data is not fully available inside Korea, and therefore, the game would not function.  Kim Tong-il, an official at South Korea’s Ministry of Land, Infrastructure and Transport, said “The main point is national security.” This Ministry oversees mapping policies for the country.

The people of South Korea are increasingly frustrated with the lack of availability. On the bus, young adults constantly are discussing the game, and as hype rises, so does frustration as there is no end in sight. The government has yet to offer a solution, so for now, Pokemon hunters in Seoul are going to be left in the dark.

What is Pokemon Go?

The latest game in the hugely popular Pokemon series, Pokemon go is one of the first augmented-reality (AR) games to be released. Augmented Reality means that video game items are laid on top of the real world, using your phone. So landmarks like famous buildings, palaces, and churches are locations for in-game activity. Pokemon is a game where you try to catch and fight adorable monsters (pocket monsters) in order to become the “very best”, aka to defeat other players and be stronger than others. An additional goal is to find ad catch all the different types of Pokemon. So if you see people of all ages, walking around and staring at their phone, hile occasionally stopping and getting really excited, they are playing Pokemon GO.