How Deep Is Trump's Love Affair with Russia? Now FBI looks Deeper into the Spy Case

Now the FBI is investigating potential cooperation between Trump advisors and the Russian to arrange and leak emails from Hillary Clinton and her party, in order to promote Donald Trump into the White House.

GLOBALO met a former, well respected director of an intelligence service and discussed the facts.

Allegations that Russia obtained compromising personal and financial information about Donald Trump became the  talk-of-the-town in Washington DC, just days before the inauguration of the new US president already in January 2017.

Extraordinary developments revealing the private and financial links between Donald Trump and Russia are threatening to overshadow the inauguration of a president and de-legitimize democracy of the United States of America.

In Bed With Moscow or “Fake News”

When faced with alleged compromising material and revelations of the business ties between president elect Donald Trump and an aggressive Russia, he dismissed them as “fake news”.

The idea that Russia has been cultivating, supporting and assisting Trump for years is a worrying prospect for the US.

Additionally the allegations that Russian spies collected blackmail documents and images – including alleged footage from a hotel in Moscow, has forced Trump on the defensive, using most of today’s press conference, his first since the election, to refute these claims in no uncertain terms.

Responding to unconfirmed and unverified documents originally published by Buzzfeed, the president-in-waiting took to Twitter.

Intelligence agencies should never have allowed this fake news to "leak" into the public. One last shot at me.Are we living in Nazi Germany?

Russia has never tried to use leverage over me. I HAVE NOTHING TO DO WITH RUSSIA – NO DEALS, NO LOANS, NO NOTHING!

Is Tough-Talking Donald Just a Puppet?

Despite the unconfirmed reports, there are real fears about how far Russian influence could reach in the Trump administration.

There remains widespread concern in the US intelligence community that Russian intelligence is aiming to undermine the 2016 election and engage on a program of hacking to embarrass the United States and de-legitimize  its democratic elections.

What’s more, all the Russian meddling appears to have been targeted to benefit Donald Trump only.

Naturally attention has turned to his business interests in Russia and the conflict on interest that could create. Despite insisting that he has had “nothing to do with Russia”, Trump has a long history of partnership with Russian business… 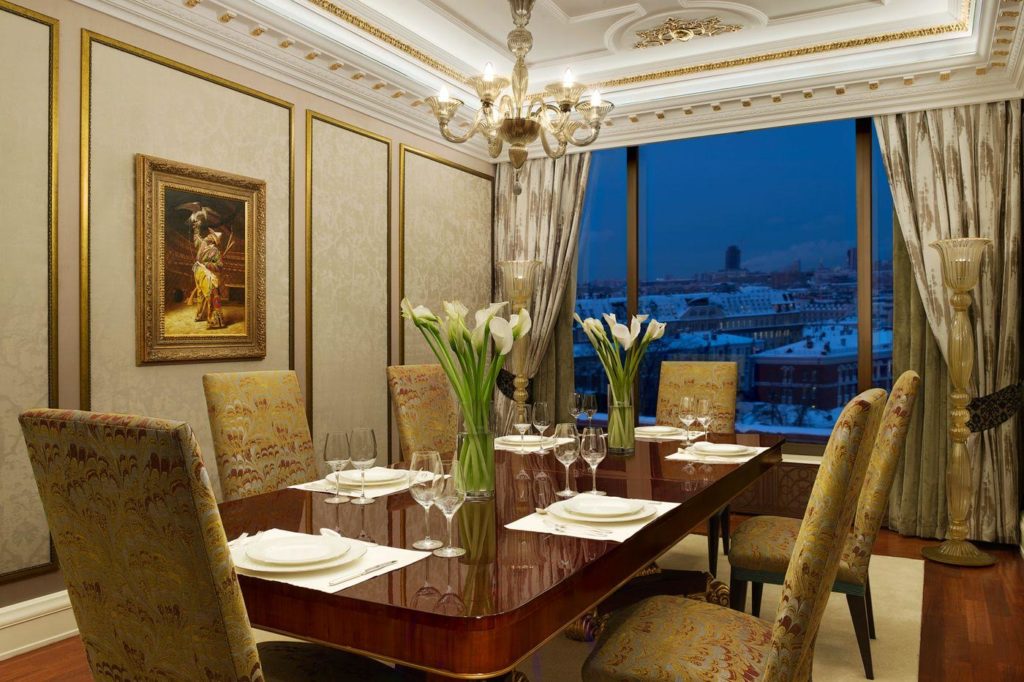 The Ritz-Carlton hotel at the center of the controversy

Some of the most lurid accusations center around compromising material from hidden cameras  while Trump stayed in a Moscow Ritz-Carlton hotel in 2013.

Built for $350 million in the heart of Moscow, the Ritz-Carlton is one of the most expensive places to stay in Moscow.  The 334-room hotel has including 65 luxury suites, with high-end restaurants and a vodka sommelier.

Russia has responded to the allegations with outrage, describing the published dossier as  ‘pulp fiction’, with Russian media attacking the reports as totally lacking in credibility.

Whether the wild allegations prove to be false or not, Donald Trump certainly has many people worried ahead of his inauguration on January 20th.

In his post-election speech he spoke of uniting the US, but the constant scandal and mire that continues to follow Trump is de-legitimizing the office of president and the democracy is represents.

What’s more, it is dominating the news cycles, meaning that we are still as uncertain as ever about the likely outcome of Trump’s first term.