Are the Polls Tightening?

Hillary Clinton is widening the gap in the polls, extending her lead over Donald Trump.

The major difference in recent polling is the dramatic increase in electoral college votes classed as toss ups, with Donald Trump losing much of his likely votes to that category.

Trump trails Clinton now and would need 144 more projected electoral votes, she only needs 8 to win. The gap is widening against the New York businessman.

There is less than one month before the election, on November 8th, 2016.

These are the latest nation wide polling data from nine sources: 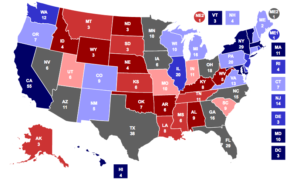 However, Trump is having a tough time accepting the polls, as usual:

We are winning and the press is refusing to report it. Don’t let them fool you- get out and vote! #DrainTheSwamp on November 8th!