Hillary made her VP announcement on Friday, amidst the horrible attack in Germany that left 9 people dead. That means that both Vice Presidential announcements came during attacks in Europe, as Trump announced Mike Pence as the world was tuning in to hear about the truck attack in Nice.

But who exactly is Tim Kaine? 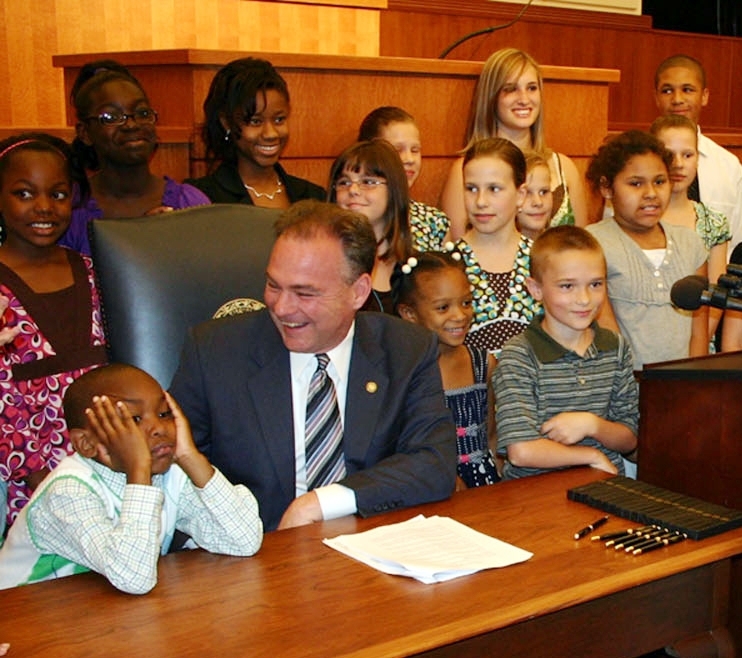 Senator Kaine with a group of Army Kids
Source: flickr

Tim Kaine, age 58, is a Democratic Senator from the state of Virginia. Virginia is a key swing state, which is definitely part of the reason why Hillary chose him. But here are the five most important facts about Tim Kaine that help show why he was chosen:

Tim Kaine is a deeply Christian man. He is led by his faith, and is even against abortion due to his religious background. This is key for Clinton, as the Conservative Christians really do not line Donald Trump, and this could be something that may sway some of them to Clinton.

Tim Kaine is a highly educated man, who holds a law degree from Harvard law School. No one can doubt his intelligence, and he fulfills the “liberal elite’ role that is always a calming point for Democratic voters.

Tim Kaine first made a name for himself when he defended death row inmates as well as victims of housing discrimination. He has always had a focus on racial reconciliation, once saying “well, if English lives matter, and Latino lives matter, then African American lives matter, and they matter every day.” Since racial tension is extremely high in America right now, choosing a person with Kaine’s track record is a brilliant move by the Clinton campaign.

Senator Kaine is completely fluent in Spanish, which comes from his time serving as a Christian Missionary in Honduras. This is a big bonus for Clinton, as she now can have a running mate who appeals to many Hispanics as well as many Conservative Christians.

Finally, Kaine has a track record in the Senate as a Senator focused on National Security, sponsoring legislation to go after ISIS, as well as criticizing Obama for not establishing a no-fly zone in Syria on humanitarian grounds. To make matters more convincing, his eldest son is also a United States Marine.

Honestly, Kaine is definitely the calculated best choice. While Trump picked Pence on a whim, based on their “chemistry”, Kaine was a calculated choice, as he fills every single box that Clinton is weak on. He is connected to the military and defense, which Clinton is not strong on. He is a deeply Christian man, which will attract the voters which Clinton does not have. He can appeal to the Hispanic voters, and the African American voters due to his past.

And, as a Democratic Senator from a key swing state, he can help bring Virginia to the table. But he also was able to win Virginia by getting the support of rural conservatives, which will be a key battleground for the general election. Clinton has indeed made the right choice to increase her chances in November.