WHY 'COMPASSIONATE JUSTICE' IS NEEDED IN ARAB COUNTRIES

Khallouk: As a former U.S. ambassador in the UAE you have watched the political and social development in the Arab World for a long time. What do you think about the present society in Arab countries?
Crane: Kissinger cut my ambassadorship short because one of my three assignments, other than protecting American citizens and improving intelligence on Iran, was to conduct two-track diplomacy with the Muslim Brotherhoods in the MENA region. Then, as now, I have believed that so-called political Islam will remain a major force in shaping the future of both the Arab and Persian worlds. The principal variable, however, will be which faction will dominate, namely, the radical Qutbian faction, which focuses on promoting a clash of civilizations and on power as the ultimate goal, or the more enlightened majority, which focuses on Hassan al Banna’s strategy of societal transformation through holistic education from the bottom up in society. Unfortunately, the radical coup in the Egyptian Muslim Brotherhood the year before the so-called Arab Spring started and the reaction to the recent failure of the various Muslim Brotherhoods, other than Shaykh Rachid al Ghannouchi’s Nahda in Tunisia, have caused a further self-defeating radicalization and a further shift toward power over principle.

Khallouk: At the moment the GCC countries are very rich according to economic values. Do you think these countries are able to keep their level in the next two or three decades with the background of the decline of the oil and gas reserves? 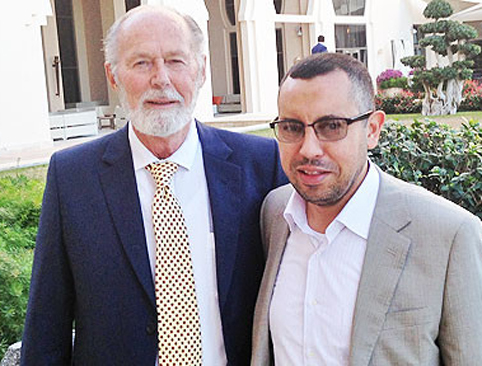 Crane: Over the near term of two or three decades my forecast is that new sources of oil and gas in the GCC countries may more than compensate for the run-down in existing reserves. Global market share, however, may decline, because the same may be true all over the world. The key variable over the longer term will be whether the GCC countries will be able to follow Qatar’s vision to become a principal manufacturing center in the world, while expanding the human rights of the expat working class. Qatar can serve as a broker for access to the $30,000,000,000 of rare metals and minerals in the Pushtun area of Central Asia, consisting of the largest part of both Afghanistan and Pakistan. This resource, coveted by China, Russia, India, and Iran, and dreamers in America, could exceed in importance thirty years from now what oil and gas are today, because as much as two-thirds in value of all products produced forty years from now will come from these minerals. Based on the track record of Herman Kahn’s long-range global forecast in his 1965 book, The Year 2,000, most of these products have yet even been invented. The other major variable will be whether the inevitably accelerating wealth gap within and among countries, caused by the Bretton Woods banking system, which bases credit on past wealth accumulation rather than on future profits, is transformed to broaden access to capital ownership, as recommended by such organizations as the Center for Economic and Social Justice and by the Unite American Party. Without such reform, global terrorism could become the global norm and destroy civilization.

Khallouk: Is there a chance for democracy and liberal civil societies in Arab and Islamic countries to reduce the incidence and influence of civil wars and religious tribalism and return to the process of democratization witnessed in Middle and Eastern Europe twenty years ago?
Crane: This is like comparing apples and oranges. To begin with, none of the Arab countries are Islamic, except perhaps Tunisia and even Morocco. Europe has achieved various levels of both individual and national self-determination, along with free markets, over a period now of centuries, whereas the entire Arab world, with the exception of hydro-carbon production, has not equaled even Italy or Spain in GNP. An important cause of this is that the European colonial powers succeeded in destroying the Arabs’ sense of personal and community identity, which is the primary motivator for creativity, honesty, and the work ethic. This was compounded by the European colonialists’ support of tyrannical or even totalitarian governments to assure that the Arabs would remain compliant while the ideology of modernism replaces the traditional spiritual basis of civilization and instead produces nihilism and entire lost generations.

Khallouk: What do you think were the main mistakes of American foreign policy in the last decade? Why was the West not able to form stability and peace in this region?
Crane: Other than the reasons given to question 3, the principal reason for failure of American policies to stabilize the Middle East has been the insistence on maintaining the borders established by the colonial powers after the First World War in order to impose the modern state, as invented at the Treaty of Westphalia in 1648, which has been used to combine different nations into a single state or to split them among two states by “nation-building”. This buzz-word is a euphemism for nation destruction. This kind of nation-building requires military intervention, which compounds the problem. This, in turn, gives rise to totalitarian solutions, like the so-called Islamic State or Da’esh, based on religious triumphalism under the banner of a so-called Islamic Caliphate. This oxymoronic concept is the diametrical opposite of the classical Islamic concept of the caliphate, best developed by Al Ghazali and Ibn Taymiya, who insisted that the Islamic caliphate does not consist of either military or political governance but rather is exclusively the consensus of the wise persons and scholars in a pluralist cosmopolis on the human responsibilities and human rights embodied in the integral jurisprudence and compassionate justice of the maqasid al shari’ah.

Khallouk: How could U.S. foreign policy promote a form of modernity in the Arab World from which not only a small elite but the whole civil society can profit?
Crane: The first requirement would be to change the basic paradigm of foreign policy from the pursuit of stability through power to the pursuit of compassionate justice, which has the bonus of being the ultimate source of power and stability. Most specifically the economic policies should support employee owned firms based on their economic profitability, rather than giving “foreign aid” as a political bribe. Germany’s “foreign aid” has always been given in the form of investment in profit-making industries and has resulted in a net return to the German economy, whereas firms supported by America either directly or through the recipient government almost never have made a profit, because this has not been the purpose. The result has been to hinder rather than help promote modernity in the form of economic prosperity. Furthermore, the foreign aid should not go through the IMF or other international monetary agency, because this always results in further concentrating the ownership of wealth in the recipient country, which is perhaps the major cause of instability and terrorism.

Khallouk:  Looking at the Arab Human Development Report, what should the rulers of Arab societies do to bring the Islamic World to the leading position it had in the early Islamic age?
Crane: The ultimate solution is to promote holistic education, which, in turn, as advocated by Hassan al Banna, the founder of the Muslim Brotherhood, and by all the great Islamic scholars over the centuries, would generate gradual reform from below and permit everyone to fulfill one’s human potential, as advocated by the optimistic and enlightened leadership of Qatar.