WHERE TERRORISTS HAVE KILLED TOURISTS

Ever since last year’s assault on Paris, Europe is fearful of potential terror attacks on its soil. At the same time, Europeans have been in the crosshairs of terrorists in other countries all over the world as well. The numbers are truly shocking.

Cairo, 1997: A group of tourists are sitting in a bus that was parked outside the Egyptian Museum in Tahrir Square, one of the busiest public places in Cairo, when at least three gunmen attacked the  bus with what appeared to be hand grenades. The incident left 10 people dead and at least 19 wounded. It was the start to a series of attacks all over the world.

Egypt not only marked the starting point of terrorism targeting tourists, it is also the country were the most people were killed in a single attack. In 2015 an international chartered passenger flight from Sharm el-Sheikh (Egypt) to Saint Petersburg (Russia) dropped out of the sky over the Sinai Peninsula. Quickly thereafter the terror organization ISIS claimed responsibility for the deadliest plane crash of 2015. All 224 passengers were killed; most of them were tourists from Russia, Ukraine and Belarus. 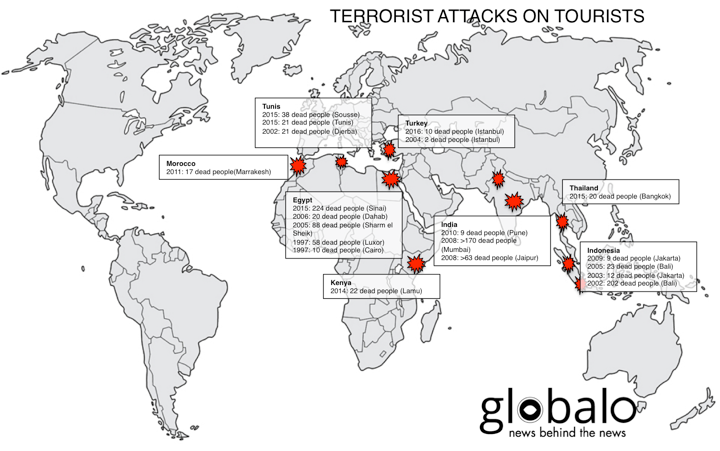 Consequences
Targeting tourists is far from a new trend in terrorism. From the Luxor killings in 1997, to the nightclub bombing in Bali in 2002, or attacks on hotels in Mumbai in 2008: terrorism has become an uncomfortable fixture in our lives and one of the terrorist’s aims is to attack our belief in security and freedom. While attacking us during our times of relaxation and recklessness makes us weak, vulnerable and skeptical.

As the Wall Street Journal reported in 2010, the chances of a Westerner being killed by a terrorist is about one in three million each year.
But regardless of this low probability, the effects on countries that become targets of terrorist attacks are profound. To economies that rely on tourism as on of their biggest sources of income and currency, even attacks with relatively few victims can cause serious damage. In the Western hemisphere, however, these effects appear to be less severe.

“Events like this (Paris attacks), whether it’s terrorist-related or natural disaster events, tend to have impacts in those regions, but not more than in a few months, People tend to have short-term memories, and the desire to travel and experience remain high.”

Since there is solidarity within the western community, the effects aren’t felt as strongly. Financially weaker countries in the Eastern Europe and Asia can’t afford the kind of big marketing campaigns required to quickly win back the travelers’ trust.

The recent attacks in Istanbul show that the threat is current and unpredictable. However we have to do our best to ignore these types of cruel terrorist propaganda stunts.

Traveling is the best medicine to avoid intolerance and anger.

Exploring new cultures and meeting new people is a wonderful thing to do that will keep the world together. Our answer is to keep the victims in our hearts and to travel the world.