Turkish President Recep Tayyip Erdogan has displayed all possible symptoms of a dictator in the past few years.

It is particularly worrying how one of the main members of NATO and traditional partner of the West is slowly slipping into authoritarianism, strangulates liberal democracy and is establishing a dictatorship within NATO. Even with the aim to join the democratic European Union. A perversion of Western and NATO politics!

Erdogan is the new Putin. But no harsh words from Washington or Brussels – eyes shut. When every move in Moscow to strangulate democracy is followed by an outcry from US Senators, the White House, the EU oder member states of NATO- nothing about the NATO-EU-US-partner- a perversion in Western policy. Now Mrs Merkel and the EU even want to make him the main partner to stop refugees and give him a White Wild Card.

Erdogan has had his eye on a constitutional change since when his third and final term as Prime Minister elapsed in the summer of 2014 and he was barred under AKP rules from seeking a new term. At that point he claimed the largely ceremonial role of President and started plotting to transfer power from the government to his new office. In the meantime, he has bolstered the role of the President just by sheer force of his character and personal power.

The new presidential palace, inaugurated by Erdogan has 1150 rooms and is reported to have cost $350 million. With an Ottoman inspired architecture it stands as a monument and reminder of is the autocratic tendencies of the new Turkish ‘Sultan’. 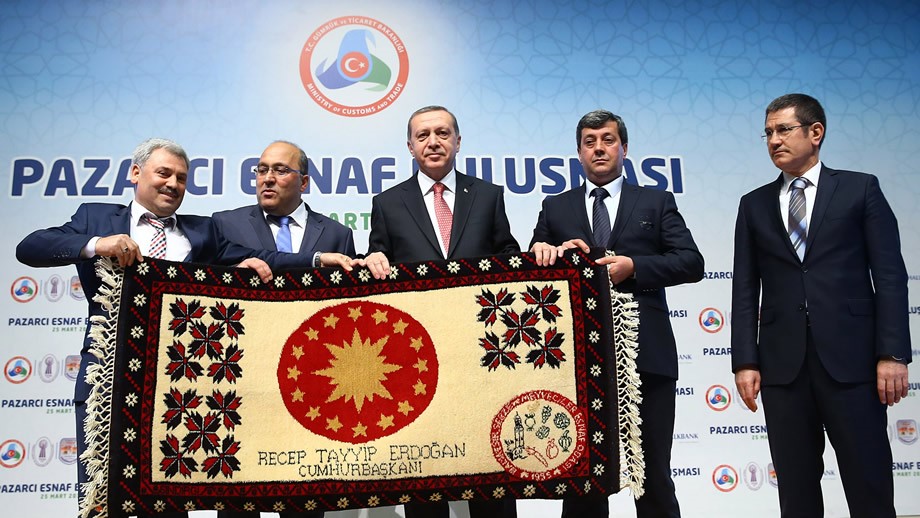 At the Turkish general election campaign exactly a year ago, he went as far with his rhetoric as to ask for votes from the Turkish people for himself. He said he needed 400 MPs from his party AKP in order to change the constitution and create an executive presidency like the US or Russia. His ambitions were first thwarted when his party failed to win an outright majority at the elections in June 2015. However, following the AKP’s electoral victory at the end of last year, Erdogan’s dreams of transferring executive powers from the government to his own office have been rekindled. Such is the recklessness of that man, that he did not hesitate to reference the Third Reich as a model for the constitutional change. When asked whether an executive presidential system was possible while maintaining the unitary structure of the state, he said: “There are already examples in the world. You can see it when you look at Hitler’s Germany.”

A spokesperson of the Turkish president said “The executive presidency is not a question of our president’s personal future. He has already entered the history books. The basic motivation is to make the system in Turkey as effective as possible.” He added that if a referendum were necessary, the Turkish people would be consulted about the constitutional changes. The real danger is that Erdogan commands great popularity, perhaps even sufficient enough for a referendum. This support is mostly based in rural and socially conservative areas.

Meanwhile, as his plans of creating a Putin-style Super-Presidency go ahead, the AKP is taking care of one other ‘nuisance’ of the liberal democratic state they inherited in 2003, namely the media. This month, after long attempts, the Turkish government finally seized the nation’s largest newspaper, Zaman, which was the only significant voice of dissent in the Turkish media sphere. A turkish court ruled that the newspaper should be run by a board of trustees, but did not employ legal sources or argumentation to justify the verdict. The court decision was followed by a protest outside of the Zaman offices. The infamous Turkish riot police Cevik Kuvet used rubber bullets and teargas to disperse the protesters. The fired editors of Zaman are attempting to start a new publication that will attempt to be unbiased and critical of the government.

Not only are newspapers being seized and journalists being fired, but they are also being arrested for exercising their freedom of expression. On 26 November of last year, Can Dündar, editor-in-chief of Cumhuriyet, and the newspaper’s Ankara bureau chief, Erdem Gül, were arrested, following their publication of a report on Turkey’s arms deal with Syria. They were held in jail for three months on charges of espionage and revealing confidential documents. They are now free but await a second trial on terrorism charges  on 25 March, which could mean life sentences for both of them.

The two journalists were absolved of their charges by the land’s highest court. Erdogan has immediately branded the court’s  ruling as “a step against the country” and warned the court that repeating such actions could bring its very existence into question.

Finally, Erdogan is displaying clear dictatorial tendencies in the way that he is dealing with his political opponents. In December 2014, a Turkish court issues an arrest warrant for Fethullah Gülen, a US-based Islamic cleric who has become a fierce critic of Erdogan. Gülen is well know in the West as an imam who promotes tolerant Islam and emphasises altruism, hard work and education. His movement subsidises colleges and universities across the globe and provides high quality education. However, in Turkey he is treated as a criminal.

At the beginning of this year, the Istanbul court started a trial aimed at 69 police and judiciary officers, most of whom are alleged to be somehow linked with Gülen’s movement. The defendants are accused of planning to overthrow the Turkish government with the corruption allegations levelled in 2013, as well as with what seems to have become a new favourite of the Turkish government, charges of membership of a terrorist group.

This is an unprecedented situation in Turkey or in any other democracy. A corrupt government not only got away with abuse but its Prime Minister even managed to make his way up to become President of the Republic. The court found against four of Erdogan’s cabinet ministers and even his own son and son in law, so everyone who was involved in administering that process is now being charged with plotting to overthrow the government, rather than conducting a due process of law.

It seems like Erdogan is following some kind of Dictatorship for Dummies handbook as all of the steps are classics: Build yourself a shiny palace, start centralising power in your hands, throw dissenting voices in prison, undermine the independence of the judiciary – and there you’ve turned your liberal democracy into a dictatorship.