IS THE AMERICAN MIDDLE CLASS VANISHING?

A new study by Pew research has taken up the challenge of defining who in America belongs to the middle class, and who does not.

It’s worrying conclusion: The US middle class is shrinking, and now less than half of Americans form part of it.

Over decades, the American middle class was the anchor of the economy of United State’s, and some argue, even the world’s, economy.

Since late 70’s however, incomes have stopped rising as strongly as they had in the period after WW2 and middle class families came under stress.

Now only about half of American adults  (120.8 million out of 242.1 million)  live in middle-income households, with 29% living in lower-income households. The latter are defined as earning less than $31,402 a year. 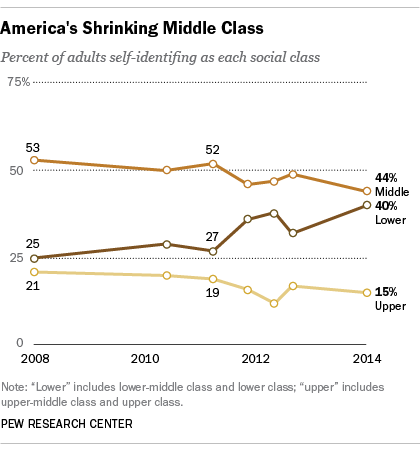 In addition, many who form part of the middle class at the moment, live in constant fear of slipping back.

The phenomenon of a slipping middle class has political implications as well. Defining the middle class only as an economic category is much too narrow a classification. It is also a political category and as such it has always been the most important target-demographic for American politicians.

In the words of Caroline Kennedy:

“I may, and I think I represent a tradition that means a lot to me, which has really always been about fighting for others, for middle-class families, for working class – for working people, you know, and that’s a tradition and a commitment that I take very seriously.”

But what happens, when this crucial stabilizers threatens to fall apart? It is not far fetched to see a correlation between the decline of the middle class and the rise of populists such a Donald Trump, who target precociously those, who have fallen off the radar of politicians only concerned to tailor their messages to a shrinking centre of society.

The danger, therefore transcends the economic sphere and presents politicians with two challenges:

1. Halt the decline of the middle class and prevent millions of families from slipping into poverty.

2. Listen to those who are already  finding themselves outside of the middle class and try to include them into the political process by addressing their fears and their understandable anger.

America can only be strong with a strong middle class. We cannot afford to let it slip away.